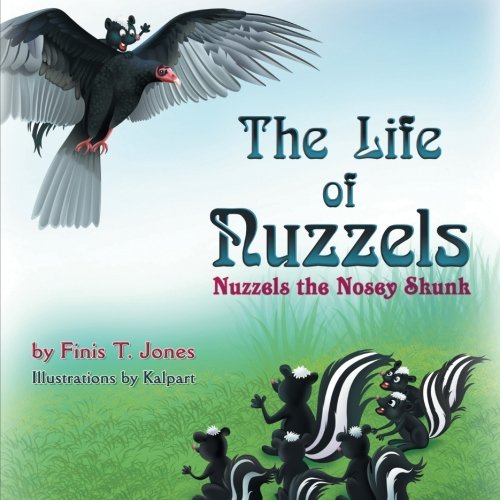 This charming book follows a young skunk that loves adventure. Nuzzels goes against his mother’s wishes, as well as the advice of his siblings, when he leaves the safety of home to visit the forest. He meets several new animal friends.

Nuzzels did something that he wasn’t supposed to do. We’ve all done that at least once in our short lives. You know when Mom or Dad tells you not to touch this, or do that, and definitely, absolutely, positively do not go outside. Come on Mom, we’d all do that if it led to a great adventure, and for Nuzzels the Nosey Skunk it did just that.

The Life of Nuzzels – Nuzzels the Nosey Skunk is a little animal mystery for kids. What makes it UNIQUE is the interesting twist that is given towards the end of the story. Let’s start with the mystery part first. As Nuzzels leaves his home he comes across a family of animals who were small and had bushy tails. As he got closer to them, they stood up on their rear legs, sniffed the air, and then ran off. Ran off, from this handsome little guy. Oooooh, ha ha ha, that’s right, he’s a skunk, a smelly skunk. That’s why they ran away, but what were those animals? How about this group, they had short tails, furry coats round ears and long noses. They seem a lot like the others but they’re completely different. Alas, they too could smell Nuzzels, so he left without trying to talk to them.

Now for that little twist—what? I can’t tell them about the twist? Whyyyyy? I really want to tell them about it. Okay, okaaaay. You’re right I don’t want to spoil this delightful book for them.

The Life of Nuzzels – Nuzzels the Nosey Skunk is for FIRST TIME READERS (1-8). It would also make a great bedtime story.

BIO – Finis T. Jones was born on a farm in Honey Grove, Texas in 1929. His childhood was difficult, to say the least. At a very early age he developed a wild imagination, partly to escape his many tribulations. He lived and worked on his parents’ farm until, at the age of twelve, he said goodbye and hitched a ride to Dallas, where after bending the truth about his age, he got a job with Sears & Roebuck. He had been there for a couple years when he decided to move to Houston. Here he met and married the love of his life. Many years after leaving the farm, he returned to Honey Grove to visit his parents for the first time. He took along his beautiful wife and two of their three children. Through the good times and the bad, he has never lost that incredible imagination, which shows in the stories he tells.