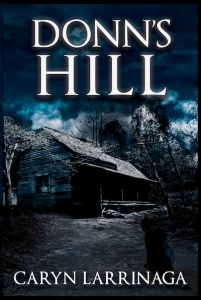 Mackenzie Clair is looking for a fresh start. She thinks she’ll find it in her favorite childhood vacation spot, but returning to Donn’s Hill awakens more than nostalgia. Mac regains a lost psychic ability to talk to the dead, and the poltergeist haunting her apartment is desperate to make her use that gift to find his killer.

Aided by her new roommate—a spirited Tortoiseshell cat named Striker—and the ghost-hunting crew of the nationally televised show Soul Searchers, Mac struggles to learn how to use her powers, but she’d better get a handle on them fast, because someone in town is hiding a deadly secret. If Mac can’t somehow divine the truth, Donn’s Hill will never be the same.

Donn’s Hill opens with a bang. Within the first seven pages, the mystery starts. Not in the usual way with the police, a little old lady, or a high profile detective looking at the body and trying to find clues. No, this story starts with Mackenzie Clair, a twenty-seven-year-old woman sleeping in a hotel bed.

Yes, the hotel is sleazy, rundown, and there was a lingering odor of stale cigarettes, but the room was clean and the price was right. Deep into sleep, she is startled by the weight of an intruder as he sits down on the side of her bed.

He makes no sounds, she can’t even hear him breathing, but she knows he’s there because she can smell a foul odor like rotting garbage. What does he want? Why doesn’t speak? Is he holding his breath? She is. After several minutes, she finally gets the nerve to turn on the lights. Her room is empty. What! Did she…? Wait! I’ve got to stop here. You’ve got to discover the rest for yourself. You won’t be disappointed.

Donn’s Hill is a paranormal mystery adventure. What makes it a UNIQUE read is the plot. While there are no twists, finding the killer is possible but impossible at the same time. THAT IS SOOOO GOOD!

Donn’s Hill is recommended for Adults and Young Adults 16 and above.

BUT IT HERE:  Amazon

BIO – Caryn Larrinaga is a Basque-American mystery, horror, and fantasy writer living in Utah with her husband and cats. Despite obtaining a degree in Anthropology (which is much cooler than you might think), she explored several career paths before deciding that she had to follow her passion. Suddenly, writing fiction was the only thing that made sense.

Watching scary movies through split fingers terrified Caryn as a child and inspires her to write now. She lives in a 90-year-old house with a colorful history, and the creaking walls and narrow hallways send her running (never walking) up the stairs from her basement whenever she has no other choice but to go down there. Exploring her fears through writing makes Caryn feel a little bit less foolish for wanting a buddy to accompany her into the tool shed.

When her fingers aren’t glued to her laptop keyboard, Caryn also enjoys binge-watching superhero television shows, reading, playing video games, and filling up her phone’s flash memory with pictures of her cats. She loves music, and plays the bass guitar.

Caryn is an active member of the League of Utah Writers and the Utah Chapter of the Horror Writers Association.