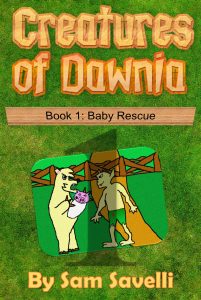 Creatures of Dawnia is a fantasy adventure series focusing on a group of animals and other ‘fantasy’ creatures living in the fictional city of Dawnia, and contains many diverse short stories focusing on the different adventures of the main characters. The first book, Baby Rescue, is a longer story that sees the main characters come together for the first time. The characters get to know one another and become friends whilst in the middle of an adventure to save a baby piglet from an evil goblin and his polar bear henchmen.

The main characters of Baby Rescue – Creatures of Dawnia—Book 1 are a very  different and unusual group. Let’s see there’s Fuzz, a mouse and Dack, a pterodactyl. They met when Fuzz was trying to get away from him because he didn’t want to be his dinner. Fuzz wasn’t successful, but that mouse used cunning and wit to stop Dack from eating him. Wait, that was after Carla, the sheep, brought the piglet to Bert, the pig, and Maggie, the cow, who lived on Dawnia Farm. It was Maggie’s job to take care of the piglet, but she couldn’t get it to stop crying. Somehow, the polar bears showed up, followed by the goblin. Then they were in the forest and met up with the dwarfs, Dougle, Dula, and Snuffy. Of course, their adventures took them to Louis. Now Louis is… Hmm, there is so much I want to tell you about Baby Rescue, but I don’t want to give away the story. The adventure is too great! I can tell you that the UNIQUE thing about Baby Rescue – Creatures of Dawnia—Book 1 is its cartoon features. Who doesn’t love a good cartoon?

BUY IT HERE;  Amazon or Smashwords

In 2016 he wrote his one hundredth ‘Creatures of Dawnia’ story and finally decided that it was about time that he did something with these stories. Having written so much, for no one other than himself and his younger sisters, he wanted to publish the stories to a larger audience. So, he set up the website dawniacity.com and began publishing the stories online and releasing them as ebooks. 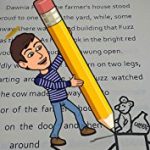 Aside from ‘Creatures of Dawnia’, Sam continues to work on a number of other writing projects. He aspired to become a writer from a young age, and plans to devote more time to his writing after completing his degree at the University of Warwick.