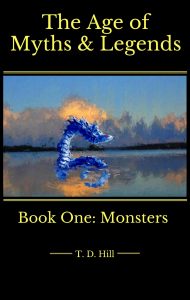 THE AGE OF MYTHS & LEGENDS
BOOK ONE: MONSTERS
Written and Illustrated by T. D. HILL

Drawn from the myths and legends of the first inhabitants of North America, the delightful tales, collected for this book series, not only offer insights into tribal character and beliefs, but they also celebrate the diverse tribal traditions of rich and powerful cultures that are still relevant today.
Beautifully illustrated throughout, this book holds an amazing collection of tales concerning the many evil creatures that once haunted the dreams and nightmares of the Indigenous tribes of North America. Told in an enchanting, yet unencumbered style, this collection seeks to shed light upon the richness, wisdom, grace, and depth of the North American tribal cultures and their timeless myths and legends.

There’s nothing more thrilling than sitting with family and/or friends around a campfire, in front of a fireplace, on a couch or simply lying the floor with bent knees crossed and elbows supporting your wide-eyed face as you listen to an ancestral story of your family’s past. What makes the story even more intriguing is when you get to share someone else’s past. This time, I had the privilege of reading and learning about the myths and legends of the American Natives populating the United States of America.

The Age of Myths & Legends – Book One: Monsters presents stories about giants, ogres, wolves, mermaids, witches, sea creatures, and little people just to name a few. Did I say little people you ask? Yes, I did. Little people can be quite vicious, I have so many stories about them, but alas, I’m not talking about my history—I’m talking about The Age of Myths & Legends- Book One: Monsters. Of course there was that group of little people who weren’t vicious. In fact, they were quite interesting as they—oh, I can’t tell you about that one. I’m going to have to let you read it yourself, because I want to tell you about Skunny Wundy who encountered a Stone Giant in my favorite legend of the book.

Skunny Wundy was a master storyteller. You see, he liked to embellish his stories. However, instead of elaborating the story’s details, he liked putting himself in it. Yes, he was better known as a braggart. Now, for some reason, this only bothered the Hoya’nê (the most powerful man in the village.) You see one day, he questioned him. “Skunny Wundy! What would you do if you saw a Stone Giant?” Without hesitation, Skunny Wundy smiled and replied, “Why I would break every bone in the giant’s body! I would tear off his arms and legs!… The Stone Giants fear me. Just one mention of my name would cause them to flee in terror!”

I am so sorry, I can’t tell you the rest of this story other than the fact that it is very hilarious and it alone is worth the price of the book. Naturally, The Age of Myths and Legends – Book One: Monsters is an ETHNIC read because of its diverse characters.

The Age of Myths & Legends – Book One: Monsters is recommended for All Ages. Now, there are some stories that may be a little scary and/or mature for younger audiences, so parental discretion is advised. However, there are some great bedtime stories, so snuggle up and enjoy. 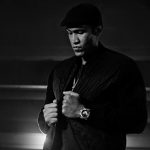 BIO – Author/Illustrator: T.D.Hill (Wichita, Kiowa, Pawnee) is a Native American writer, artist, and motivational speaker. Much of his writing draws upon his experiences as an Indigenous American with ancestry from several tribes. He grew up in Southwestern Oklahoma and now lives in Austin, Texas.
He can be reached at: NATIVE TALES