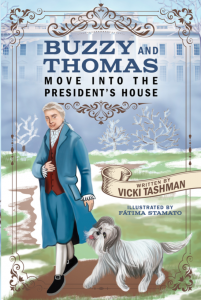 BUZZY AND THOMAS MOVE INTO THE PRESIDENT’S HOUSE

It’s 1801 and life is good for Buzzy the dog. She lives with Thomas Jefferson at Monticello, but her life turns upside down when Thomas tells her that they’re moving to the President’s House. Buzzy doesn’t want to move. She’s afraid to leave the comfort of Monticello. What will she do? This enjoyable children’s book teaches kids about President Jefferson, the new breed of dog he brought home from France and confronting issues about moving. If your child loves books by Robert Dawson like “Ben and Me,” then he’ll love Buzzy! Historical fiction at its best: learning from the pets of famous people in history.

Have you ever had a chance to talk to a dog? I mean really sit down, just you and the dog and have a conversation? Why are you laughing? Okay, maybe it is a little funny because you say dogs can’t talk. Yes, I do know that it is common knowledge that dogs don’t know what you are saying either—or do they? I know my dog understood every word I ever said to her, and showed her understanding and responses through head tilts, whimpers, and quiet barks.

So I wasn’t surprised at how Buzzy expressed her feelings when she heard about Thomas moving from Monticello to the President’s House and that he planned to take her with him. She wasn’t…, You see none of the other animals were… I expected her to—well she didn’t do that. Then, I expected her to—oh, that didn’t happen either. What? What did I expect would happen? What? What did she do? You’ll solve that mystery when you read Buzzy and Thomas Move Into The President’s House. What is it that makes Buzzy and Thomas Move into the President’s House a UNIQUE read? It’s what Buzzy did just before they left Monticello. You know, I could have never gotten my dog to do that. Do what? Are you kidding? You’ll find out when you read it.

Buzzy and Thomas Move Into The President’s House is recommended for First Time Readers between the ages of 4 – 8. 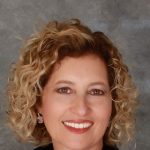 BIO – Vicki Tashman has always loved historical fiction. Inspiration struck four years ago when her daughter graduated from college and moved back home with two cats in tow. She imagined the cats belonging to Cleopatra and, wow, the stories they could tell! After researching many people in history, she settled on writing her first children’s historical fiction book about Thomas Jefferson and his dog, Buzzy. Other books in the works are about Queen Victoria and her dog, Dash, the Wright Brothers and their dog.    Vicki has a Bachelor of Science degree in Journalism from the University of Colorado. She is a breast cancer survivor and has been an advocate for ten years. She is a member of the Society of Children’s Book Writers and Illustrators (SCBWI), Children’s Book Writers of Los Angeles (CBW-LA), the Publisher’s Association of Los Angeles (PALA) and The Independent Book Publishers Association (IBPA). She lives in Los Angeles with her husband and their two golden retrievers, Ricky and Georgia.