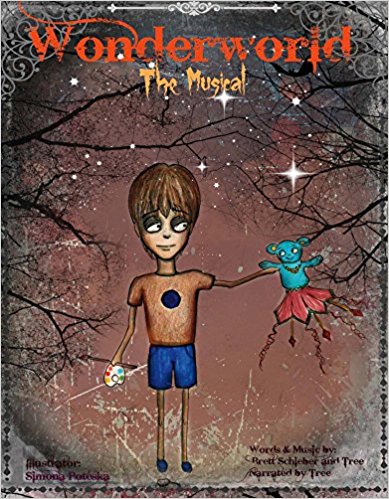 Wonderworld: The Musical is a Tim Burton style fairytale about Max, a lonely and confused boy who struggles with distinguishing reality from fiction. An outcast, he is picked on in school and his only solace is found in his art (his “Wonderworld”). At his lowest moments, his creations come to life to sing to him. Can his art save him?

Have you ever felt that you didn’t belong? That no matter how hard you tried, you couldn’t make friends or people found you weird? That was Max’s world. He always seemed to be in the wrong place at the wrong time. To end his confusion and loneliness, he discovered Wonderworld, an imaginary place created solely by his imagination, and a box of colored pencils.

Now the thing about Max is that—. Oh, I can’t tell you that part. I don’t want to spoil it for you. In fact that part, that thing I can’t tell you about is what makes this a UNIQUE read. It also shows that the evil person and the good person are—oops, almost.

Wonderworld: The Musical is recommended for Middle Grade Readers. However, the musical version of the book is a great teacher for First Time readers or as a bedtime story for those children that can’t read yet.

Brett Schieber is the musical half of the electro-acoustic duo Arcanum. He also records solo music and gigs frequently. In addition to being an in demand writer, producer, and session musician for other artists, he writes and records popular educational music for children under the name of Mark D. Pencil and Friends with his friend, Ace. He loves all animals, Duran Duran, and Star Wars. Tree, the narrator and vocalist of “Wonderworld: The Musical”, is the lead singer of the critically acclaimed electro-acoustic duo Arcanum. He produces solo music, art, and writings under the moniker of Kobritz. He does not own a computer.