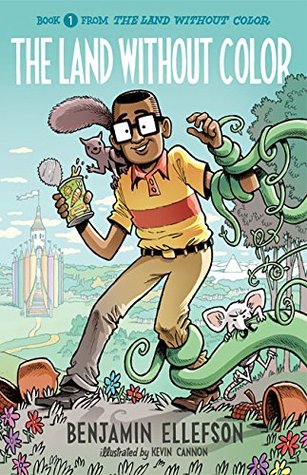 THE LAND WITHOUT COLOR
BENJAMIN ELLEFSON
ILLUSTRATED BY KEVIN CANNON

Lost in a strange land where everything is gray, Alvin must find the true color thieves to save the princesses and restore the color to the kingdom.

Floating into the air with an enormous gum bubble, Alvin lands in a strange world where everything is gray. The trees, the flowers, the dirt, the sky, the animals, and even the people are all missing their color.

Confronted with the mystery of the missing color, Alvin teams up with some unexpected friends to battle man-eating plants, outsmart the bumbling Crimson Guards, cross the Sugar Desert, overcome the two-headed dragon, and find the color-stealing goblins to restore color to the kingdom.

It starts off with a simple game of kick the can. but with Brandon and Steven being the only ones free, it was bound to end in a tie. And…it almost did. You see they both reached the can at the same time, they both kicked it up into the air at the same time, but when it came down, somehow it landed in front of Steven making Brandon and all the other kids the winners.

As they celebrate the win, Paul and Derek, two brothers, drop by and asked them to go fishing. However, they can’t find anything to cut the spool of fishing line. Wait! Brandon’s grandfather lives near the pond, They can get something from him to cut fishing lines for each of them.

Grandpa Alvin, pulls out a pocket knife and not since the Wizard of Oz has such an adventure been told. A wad of Never Pop bubble gum lands twelve-year old Alvin son of Jack in a place that is all gray. The grass, the road, the sky, everything, Well not Permy of course, but everything else is gray. Together, Alvin and Permy set out on a trek across THE LAND WITHOUT COLOR simply to find out what happened and change everything back to its normal self.

Did I say simply. Nothing is ever simple and THE LAND WITHOUT COLOR doesn’t disappoint. First there’s…, then… well next… Shucks, I can’t tell you about any of that. You’ll just have to find out for yourself as you read THE LAND WITHOUT COLOR. I can say that there is one wicked twist that will have every parent cheering.

Another thing that I really enjoyed about THE LAND WITHOUT COLOR and which makes the story UNIQUE is that it had lots and lots of pictures. Something that is very rare in a Middle Grade Book. However, its main character, which turns out to be Alvin, provides an ETHNIC read.

THE LAND WITHOUT COLOR is primarily recommended for Middle Grade Readers (9-12) especially those boys and girls who are reluctant to read. However, because of the illustrations, I also recommend this book for first time readers who show advanced reading skills.

WHERE TO BUY:  Amazon

Childhood was a magical time for him. Benjamin grew up in a neighborhood full of kids. Every day was filled with imagination, adventures, fantasy, and wonderful stories. In school he loved any project that let him explore his creativity.

When Benjamin was older, he traveled across the country to study story telling at the University of Southern California in their school of Cinema/Television. While in school, he had the amazing opportunity to work on several film productions and saw stories coming to life first hand.

Over several years after school, Benjamin had four beautiful daughters. When they were little, he spent all of his creative energy giving them the magical childhood that he had when he was small. There was nothing as exciting to Benjamin as watching their imaginations flourish as they explored the world.

Now that they are older, he wants to give that magic to all of the children of the world. Benjamin focuses his writing on modern fairy tales that are fun for kids and thought provoking for adults. Each adventure celebrates important values of self-reliance, preparedness, and diversity. He hopes with each book to spark imagination in each reader.