It’s midsummer. David Elbert’s final semester at the university comes to an end. For this fresh Engineer, the daunting task of saving a company from imminent disaster soon pales in comparison to the multimillion-dollar stash of drugs and money found in a luxurious property he comes to own. His nerves start to singe. Criminals come out of the wood work. Escalation is imminent. When police and drug enforcement agents pop onto the scene, all hell quickly breaks loose. At this point, pure survival instinct takes over.

When I started reading Intrinsic Encounters I expected mystery, intrigue, espionage, and a spy thriller. Why? I’m not sure, that’s just what the cover spoke to me. Instead, I got the longest most hilarious first chapter I’ve ever read. It gave you all of David’s backstory. And the things he did as a kid. Hm, hm, hm. His parents way of resolving the problem–priceless. I’m still laughing.

Getting over my initial shock that this was not a mystery was replaced by some well written humor. This hype was immediately replaced as we returned to the present and David presented a more somber mood.

Then Elise came into the picture, David’s girl friend. No, not girlfriend, his friend that is a girl. That is until David realizes his like for her has moved into love. Aaaah, a budding romance. This is a romance novel. Of course not! Let me be clear that relationship does develop throughout the novel, but—there was that thing you know, that thing that centered around Displaytek (the place where David did his internship). That engineering thing that got him there in the first place and was the primary story of the book. Right, Let me explain it more clearly, It was that thing that some of us would label as technology. While others would call it geeky and nerdy. Oh! Or science fiction as those of us who must categorize books into genres would call it.

No mystery! I should have really been let down. But, I like humor. I like romance. Wait, I even like science fiction. Besides, there was a little bit of mystery with that drug thing. Yet, you already know about that.

The UNIQUE thing about Intrinsic Encounters is the suspense. Yes, you heard me, it is a suspense thriller, (my mystery) with lots of action and adventure. When David walks into Displaytek on the first day, and talks to Anje Tille of Human Resources, he asks her what is expected of him as an intern. Her answer is what kept me turning the pages of this book. With characters like Henrik Wang and John Nwosu, Intrinsic Encounters is also an ETHNIC read.

This book is recommended for Young Adults from age 16 and Adults. 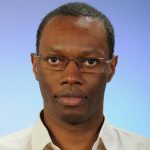 BIO:  K. M. Oddeck received his degree in Business Engineering from the University of Applied Sciences in Jena.  Upon graduation, he started writing Intrinsic Encounters.  He currently lives in Germany.