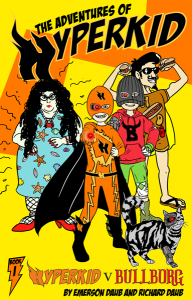 The Adventures of HyperKid v BullBorg is about a fourth grader named Morgan Wallace who is hyperactive and sometimes has difficulty focusing on the tasks of everyday life. He is self-conscious about being different, but he soon finds out what it is like to really be different after the rays of a meteor transform him into a cyborg with super powers. After the family doctor is unable to transform him back into a regular nine year old, Morgan convinces his parents to let him keep his powers to help people as the super hero “HyperKid”. His first mission is to defend his schoolmates from a bully named Brian Bullini on the playground, who also turns out to be a cyborg with powers and who assumes the identity of “BullBorg”. But Morgan ultimately discovers that you don’t need to be a super hero to overcome the difficulties you encounter in life, and you don’t have to be a super hero to help other people. He also learns that you can’t judge others by what you see on the surface, which leads him to realize that Brian is not a bully at all and that they have a lot more in common than it seemed at first.

While this book covers a wide range of serious issues beyond hyperactivity (bullying, intolerance, loneliness, and pre-judgment of people), The Advenures of HyperKid v BullBorg is also a fun super hero story with humorous characters involved in a suspenseful adventure story.

For me, an interesting thing about The Adventures of HyperKid v Bullborg. was BullBorg. You know he’s… Well he’s… But then… I can’t really explain it without giving the story away. Besides what I was going to tell you isn’t really true. You know, I mean something else happened that was so awesome while HyperKid was taking him to the Nurse’s Office. Oops, I almost did it again. I definitely shouldn’t tell you about the teachers, who provided the comic relief. Oh, and let’s not forget Dr. Popsicle. What? Didn’t I just say I can’t talk about that. You’re just gonna have to read it for yourself.

I can say this, the thing I loved about The Adventures of HyperKid v BullLBorg was the relationship between Hyperkid and his father which lead to a great relationship between Hyperkid and Bullborg. Ahhhh, what did I do? Oh well, you can’t keep everything a secret. I also loved the dynamic way their super powers were developed as well as their limitations.

The Adventures of HyperKid v BullBorg is a UNIQUE and SPECIAL NEEDS read because of it characters and their unusual situations.

The Adventures of HyperKid v BullBorg is recommended for First Time Readers (7-8) and Middle Grade Readers (9-11) not to mention all kids that have been bullied, pre-judged, discriminated against, etc., etc., etc.

BIO   Emerson Daub is a fourth grade student who loves to play with toys and has a healthy interest in cyborgs and super heroes. Having already written a children’s book with his father Richard about their pet cats titled Spaulding and Zoom, Emerson expressed interest in writing a new book that combined two of his favorite interests. In writing this new book, Emerson, who has a very creative mind and active imagination, sat down with his father and in one sitting made up the story that would become The Adventures of HyperKid: HyperKid v BullBorg. Richard, who at one time had been a reporter but admittedly has very limited knowledge of cyborgs and modern super heroes, took extremely diligent notes and asked many detailed questions about the characters and the story. After this marathon session, Richard typed up the notes and gave them a voice. Over the following months, the father and son duo worked together to refine the prose into a tight but entertaining first person narrative. They hope the finished work will be enjoyed by all who read it and that it will serve as inspiration for everyone to rise above their personal obstacles and not let them hinder the pursuit of their goals and dreams.